The horizontal chisel point helps to pull the machine into the correct ground depth and helps it maintain that depth. It also disrupts the soil upward, usually with minimal displacement. You do not have to push it into the soil; it pulls itself in! 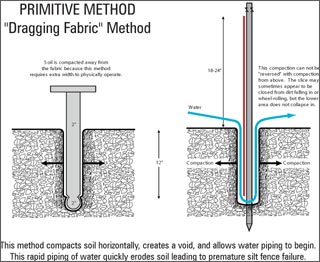 Two, disrupting the soil upward creates an optimal condition for mechanical compaction, especially wheel-rolling with the power source. Minimal time, labor and equipment are required for compaction — both critical factors in contractor adherence to the specifications.

Minimal soil disruption and displacement maintain some of the soil's original profile enabling compaction back to its original state, insuring greater soil stability, and thus greater resistance to washout.

The slicing method nearly eliminates washouts. The word nearly is used because other factors such as the machine operator, the weight and repetitions of compaction, trash in the soil, soil structure, and moisture can all effect the outcome.

I bought my first tommy™ in ’98 and second in 2000. We’ve probably installed a couple of million feet of silt fence, so we’ve definitely challenged it in as many ways as possible. Some of these soils in California are nearly impenetrable, but we get it done with the tommy™. It just plain works great.